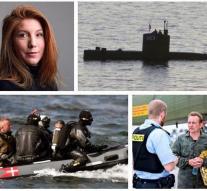 copenhagen - The murder suspect Danish submarine captain Peter Madsen has agreed to a psychological investigation. According to the Danish justice, Madsen killed the Swedish journalist Kim Wall (30) in his self-built boat.

After the murder, Madsen cut the woman into pieces and put it overboard, the Public Prosecutor thinks. Parts of the body rinsed later. The suspect denies having committed the murder. He declared that Wall had a hatch on her head and died thereby. He admitted to having cut her in pieces.

Earlier this month, 46-year-old Madsen refused another psychological investigation. Such research consists of conversations with psychologists, doctors and social workers.