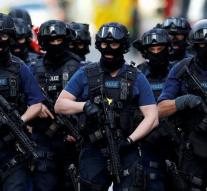 brussels - EU leaders are firmly committed to pushing terrorism, hatred and violent extremism. Terrorist propaganda and hate messages on the internet should be faster offline. At their summit in Brussels, they decided to exchange more information on Syria fighters and radicalization in Europe on Thursday, to better control the external borders and to close the money flows to terrorists.

The leaders urged big tech companies and social media companies to speed up working on (automatic) removal of propaganda and calls for hate on the Internet. If necessary, legislation comes, said EU president Donald Tusk. 'Terrorism is still a huge threat. '

Systems with which terrorists can communicate undisturbed, the leaders also take great care. For example, encryption means that secret services can not read messages. A solution must be found, as stated in the final conclusions.

With the recent attacks in London and Manchester in mind, British Prime Minister Theresa May pointed to the need to stop the spread of extremism on the Internet. 'We must prevent terrorists from having a safe place online. 'French president Emmanuel Macron also called for the fight against terrorism.