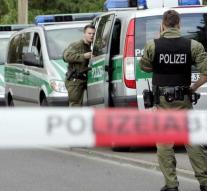 munich - The prevented junk in the Bavarian Gemering, where two Dutch criminals were arrested, is reminiscent of a feature film. A gang tried to ram a bank with a lightning stolen Audi, but was awaited by the police. This was followed by a shooting and a chase, with four injuries as a result. 'The agents were in mortal danger.'

A very expensive and 400 hp Audi RS7, stolen shortly before, approaching the branch of the local Sparda bank on the town square, ignorant that the South German police are lurking. At the moment that the perpetrators want to go into the bank, six dark police cars drive them. Immediately the suspects jump into their black limousine and attempt to escape. An agent gets trapped and his leg breaks. Two colleagues sustain bruises. 'There was a danger to our civil servants,' said a spokesperson for the police.

The police shoot the 27-year-old driver in the shoulder, but the co-driver escapes on foot. Man and power, including the police helicopter, will be inspected for the suspect. 'These were highly professional and extremely aggressive perpetrators, who play in the Champions League of bank robberies,' says a spokesperson.

Half an hour after the failed wreck, three people- two young women (17 and 19) and a 47-year-old man- are arrested in neighboring Gilching. According to insiders they would come from the Utrecht and Amsterdam region. According to the Ministry of Foreign Affairs, two of them have a Dutch passport. The Bavarian police speak of 'Nafri's', an abbreviation for North African revolving door criminals.

The police assume that the gang is also responsible for seven other plunks, where in the past two years a large amount of money was seized. It involves a total of almost 900,000 euros. 'This is a traveling group from abroad that operates internationally. '

The federal detective from Wiesbaden says that there are many cases where criminals cross the German border for quick cracking. Last year there were 140 cases in Germany, this year it was already 187 times hit. 'It seems to be attractive,' said a woman in the news. She points out that usually a small amount is captured, but that the material damage is much higher.

Justice in Munich investigates the case, among other things because of the suspicion of attempted manslaughter. The co-driver is still fugitive.