Home / World / The boy swallows the fidget spinning in 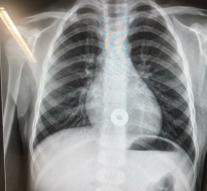 sydney - A Sydney boy was taken to hospital soon after having swallowed part of his fidget spinner. The toy has grown into a global rage over the last few weeks, but his mother warns in a message on Facebook for the spinner's dangers.

According to the Facebook message, the spinner was already damaged, which suddenly lost the weight in one of the wings. When the boy turned around, the weight loosened and he swallowed it through.

On the X-ray- which was made in the hospital- the particle is clearly visible. It is now awaiting whether the weight leaves the body through the natural way. Otherwise, it should be removed in a different way.