Home / World / The bloody trail of the Red Army Faction 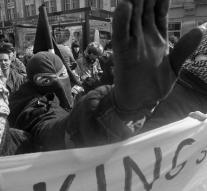 - Killings, attacks and abductions. More than twenty years, Germany was in the grip of the radical left-wing terrorism of the Red Army Faction (RAF). Their armed resistance against the 'imperial system' took more than thirty people died, among them senior figures from business and politics.

Forerunner of the RAF was the Baader-Meinhof group, founded by Andreas Baader and Ulrike Meinhof, the journalist. Arise during the student uprisings of the sixties, the focus of this 'first generation' is anger over the Vietnam War, especially in American institutions. Only after massive police deployment know the authorities in 1972 to address the hard core and this first phase ended.

Without clear political motives put the 'second generation' terrorist actions continued three years later. Their leaders have since 1977 Christian Klar and Brigitte Mohnhaupt. Their main goal is the release of the 'first generation'. The violence is concentrated in 1977 in what the history is entered as the 'German Autumn'. The terrorists murder include a chief prosecutor and a banker.

People mourn at the funeral of the murdered Hanns-Martin Schleyer (Photo October 25, 1977).

If the state does not address the release of the requirements, the RAF kidnaps in September, the president of the German employers' association, Hanns Martin Schleyer, and threatens to kill him. To enforce their demands, hijack Palestinian militants on October 13 an extension of Lufthansa. Despite great pressure keeps Chancellor Helmut Schmidt back straight. After a few days make commands with a storming end to the hijacking. That same day commit Baader and Ensslin and Raspe fellow convicts in prison suicide and Schleyer is murdered by three shots. Klar and Mohnhaupt hiding and managed to escape until 1982 the clutches of the police.

The 'third generation' goes through a wave of violence. Members commit a series of murders carried out professionally. Victims include a top executive of Siemens (1986), the President of the German Bank (1989), and in 1991 the leader of the Treuhand, the agency that privatized former East German state enterprises. Only in April 1998 the terrorist group disbands.

In the Netherlands the RAF left a deadly trail after. Our country was already in the seventies an important refuge for terrorists. Although the RAF had no terrorist actions eyes on Dutch territory, it came to violent confrontations. In 1977, a Utrecht police sergeant was shot dead by the RAF member Knut Folkerts. A year later came a shootout with RAF members in Kerkrade two Dutch customs officers killed.