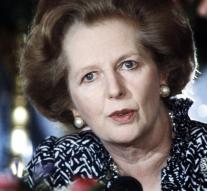 london - Former British Prime Minister Margaret Thatcher received an urgent request to soften its image. The ' Iron Lady ' was the advice of the head of its press department , Bernard Ingham. This is evident from declassified personal papers of Thatcher, the BBC writes Saturday .

In a five -page memo Ingham sums up the strengths and weaknesses of Thatcher. He writes that they intimidating, fierce and bossy is. At the same time he describes her as a decisive and resolute person and if someone who clearly does not want to let down. Despite change the advice of her press officer would have Thatcher refused her tone and she did not use words like compassion and caring in your mouth during speeches.

Thatcher became in 1979 the first female prime minister of the United Kingdom. The Eurosceptic Thatcher got to her unwavering attitude towards the trade unions and in the war with Argentina over the Falkland Islands nicknamed The Iron Lady (Iron Lady). She died April 8, 2013 at the age of 87.