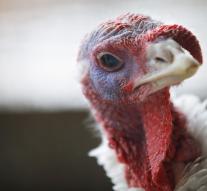 amsterdam - Americans to dig deeper into their pockets as possible for the traditional Thanksgiving turkey. Due to an outbreak of bird flu earlier this year the supply is smaller and prices are at records.

This was reported by Bloomberg based on industry figures and government data. Unless many Americans suddenly switch to a vegetarian meal will also this year many families will sit down at a table with a turkey as a centerpiece.

The prices are on the rise, due to an outbreak of bird flu that the sector from January to June in its grip. Fresh turkey is in a year's time 18 % more expensive and provides farmers now $ 1.598 per pound on. Also frozen turkey has risen considerably in price.

The increased prices are not immediately required to hit the American consumer, because retailers often give discounts on turkeys to attract customers. Possibly they take a part of the price rise on their behalf.