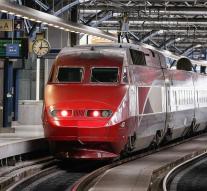 paris - The 27-year-old man living in a high-speed Thalys wanted to carry out an attack, has at last published in August 2015. Ayoub El Khazzani recognized in front of a French investigating judge that he is a jihadist and wanted to carry out an attack on the train from Amsterdam to Paris. However, he argued certainly never intended to have been wreaking carnage among civilians.

The Moroccan El Kharrazi said to have had a specific target, reported French media Thursday. Who or what was the target, is unclear. He opened fire on the train and was quickly overpowered by American soldiers in the wagon.

Four people were injured. He was transferred to the police in the northern French Arras station. Initially, he explained just have to commit a robbery and did more silent.