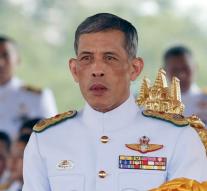 bangkok - Authorities in Thailand are making preparations for a succession. On December 1 Crown Prince Vajiralongkorn must succeed his father Bhumibol, said two sources in the army.

The king has a very prominent place in Thai society and the country since the death of Bhumibol then plunged into deep mourning. Even the succession is a sensitive issue, but behind the scenes it certainly worked according to the sources. ' We are making preparations. Everything is controlled by 1 December. '' One of the sources emphasize that the plan also depends on the crown prince.

The formal coronation of the new king, with all the festivities that go with them, can take place only after Bhumibols cremation. Which is scheduled for a year after his death. Bhumibol died on 13 October.