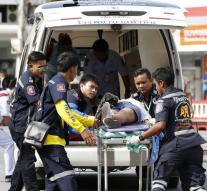 - The Thai authorities had advance information about the series of attacks in the country. Precise information about where and when the attacks would take place, there was not. Therefore could not react adequately. That says a Thai police Friday.

In attacks in southern Thailand were four deaths. Another 32 people were injured, including four Dutch.