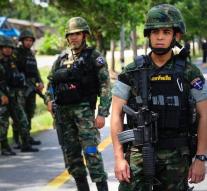 bangkok - The Thai police have a man in their sights they suspect the attacks on a number of resorts that last week four people cost the life. The suspect is from the southern border region where radical Islamic rebels fighting for years against the government.

Ahama Lengha, as the accused is called, is still at large. It is unclear whether he is in Thailand. Thailand operates in detecting Ahama with neighboring Malaysia.

Responsibility for the attacks, including four Dutch tourists were injured, has not been claimed. The chief of the national police pointed an accusing finger at the opposition. However, the arrest warrant for the southerner Ahama gives new food to the idea that the southern Thai rebels had a hand in the attacks.