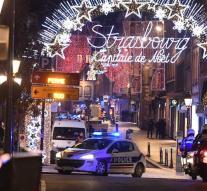 strasbourg/bangkok - Among the three deaths caused by the shooting in the French city of Strasbourg is a Thai tourist. According to the Ministry of Foreign Affairs of the Southeast Asian country it is a 45...

The couple had arrived in the city only a few hours before the shooting. The woman remained unharmed. The man died by a bullet in the head. The gunner, who according to the police presumably had a terrorist motive, is still on the run.

There are many tourists in Strasbourg at this time of the year because of the large Christmas market that takes place there in the center of the city.