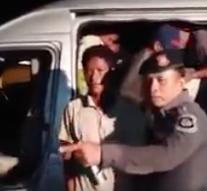 - "Police in Thailand Sunday counted 41 men who had managed to squeeze in a car van. The Toyota Commuter is designed for up to sixteen passengers. These cars are very popular in Thailand for the transport from one city to another."

"That 41 people sat in a van for sixteen, looks like. But last year the Russian police took the same number of occupants of a Toyota Rav4, designed for five passengers. That dubious record even ended up in the book of Guinness World Records, according to The Guardian."