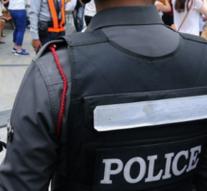 bangkok - The Thai police on Friday raided a crack house in Bangkok made a startling discovery. There were detected as expected narcotics, weapons and false passports, but when opening a locked cabinet on the ground floor there is a corpse rolled out.

The body of a man, cut into six pieces, was wrapped in plastic. His identity is still unknown, probably it is a foreigner.

There were arrested, according to the Bangkok Post, five people, two Americans, a Briton and a couple from Myanmar. It was preceded by a shooting in which a policeman was injured.