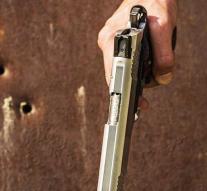 bangkok - A Thai man shot six relatives after a New Year's Eve party. Then he killed himself.

The police reported that the 41-year-old Sucheep Sornsung returned to his home in the southern province of Chumphon after a party and began to argue with family members there. Then he opened the fire to his family. Among the victims are a 6-year-old and a 9-year-old daughter of the man. He also killed two men and two women.

Witnesses said the man was a moderate drinker. He would, however, have problems with his wife's family.