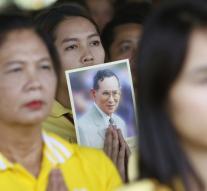 - The health of Thai King Bhumibol has further deteriorated. After receiving a hemodialysis treatment, in which blood is filtered through an artificial kidney, the condition of the 88-year-old frost is unstable. That made it known palace Sunday.

Bhumibol, the world's longest reigning monarch, underwent hemodialysis Saturday. As a result of the treatment decreased his blood pressure. With the help of medication and a ventilator is trying to get the blood pressure back on track.

It is unusual to report the thai palace that the health of the king is unstable. Medical bulletins are usually sent as Bhumibol something better is increasing again.

The bulletin was sent Sunday is the second this month. Last week it was announced that Bhumibol was suffering from blood poisoning and inflammation in his left lung. Also there was fluid in his lungs. The Thai king remains several years in the Siriraj Hospital in Bangkok. On January 11 he was last seen in public when he visited his palace in the Thai capital.