Home / World / Thai in line to bid farewell to king 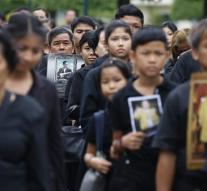 bangkok - Tens of thousands of people were sat on the royal palace in the Thai capital Bangkok in line to bid farewell to King Bhumibol Adulyadej, who died at the age of 88 on October 13.

Approximately 80 000 people came to the palace, most dressed in black. The authorities have said that up to 10 000 people are admitted per day.

Bhumibol, formally King Rama IX reigned over seventy years. He was revered as a deity by the population and played a unifying role in the politically heated land.

Crown Prince Vajiralongkorn (64) succeeds him. He can only formally ascend the throne after the cremation of the king, in a year.

Criticism of the king, queen, crown prince or regent in Thailand punishable with imprisonment up to fifteen years per offense.