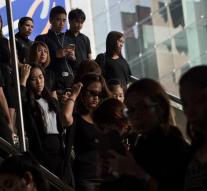 bangkok - Numerous Thai in recent days become the target of the wrath of fellow countrymen because they would not have given sufficient evidence of their grief after the death of King Bhumibol. Premier Prayut Chan-o-cha Monday called for calm.

He said that especially in this difficult period, the unit should be kept, the newspaper Bangkok Post. On the tourist island of Koh Samui, approximately 560 kilometers south of Bangkok, a mob forced to kneel before a woman a portrait of the deceased king. They would not clearly show that she is in mourning.

On a photo of a man in an orange shirt on social media were fierce reactions. 'Why he does not wear black? He has no conscience, 'says a message. Also on the street, many people treated hostile because they were not white or black mourning clothes. Some asked for repentance and said they had no money for mourning clothes.

King Bhumibol died Thursday at the age of 88.