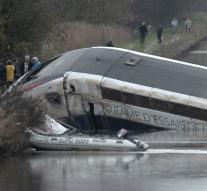 strasbourg - The French TGV high-speed train which derailed Saturday times a road test, driving too fast. That Ségolène Royal, the French Minister of the Environment said Saturday. It is not clear why the train was moving too fast. The accident near Strasbourg were ten people killed and 32 others injured.

There is no evidence of tampering and there is no evidence of a connection with the attacks in Paris. The TGV train derailed and caught fire. TGV locomotive ended up in the Marne- Rhine Canal. During the test drive were 49 people on the train, mainly technicians and relatives. The test drive was released on a new high-speed railway that is not for the normal timetable.