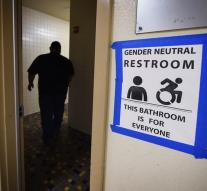 - The legal battle in the United States about whether transgender people in schools may or may not decide to what toilet they go, is not yet settled. A judge from the state of Texas ruled that students may not choose. Choice would jeopardize the safety of others at risk.

President Barack Obama decided in May that schools have to choose all pupils, but 23 states have since lodged an appeal against. The case is discussed later in the Supreme Court, but opponents of transgender rights see the decision of the Texas court as a signal of future profits.