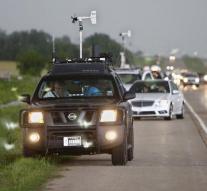 houston - Tornadoes left a tragedy of destruction in East Texas on Saturday. The winds fell at least one dead. According to local media in the US state there are about fifty wounded.

In the places Henderson and Van Zandt held five tornado's house. Homes were damaged and cars were thrown into the air. The weather services expect more winds, so the highways are closed on Sunday.