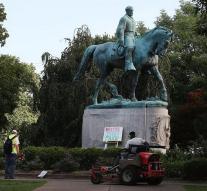 houston - A man from Houston has tried to place explosives under a statue in a park in his hometown. He was arrested.

The 25-year-old man was spotted in Hermann Park on Saturday night in the bushes at the statue of Confederation Officer Richard Dowling, reporting local media. He would like to blow the image with explosives that he had with him.

One day earlier, hundreds of people gathered in Sam Houston Park in the same city to protest against the statue in the park there. According to the activists, the image is a racist symbol and glorifies the Confederation Monuments, a covenant of southern states in civil war, slavery past.

In Charlottesville, the threatening removal of a statue of General Robert E. Lee, the captain of the southern states, led earlier this month to a mars of right-wing extremists who degenerated in chaos.

The 25-year-old Texan has already been convicted of possession of explosives.