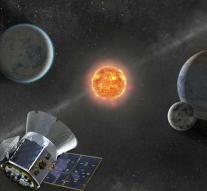 cape canaveral - She will not find extraterrestrial life. But Tess, a new space telescope, can bring us a step closer to an answer to the question: is there somewhere else in the universe a planet where life might be possible. The American explorer is launched in the night from Monday to Tuesday (Dutch time). The launch is scheduled for 00.32 hours Dutch time.

Tess is an abbreviation for Transiting Exoplanet Survey Satellite. That refers to the way he works. Exoplanets are too small to see for themselves. But if such a planet passes before its star (transition), the light of the star is dimmed slightly, because the planet holds back a little bit of starlight. Tess measures that and that way scientists can work out how many planets there are, how big they are and how long they'll do to turn around their star.

Scientists think that the chance of extraterrestrial life is greatest on a planet like the earth: not too hot and not too cold, rocky and with liquid water. The scientists behind the mission expect that Tess will discover thousands of planets, some of which will be as large as the earth and a few hundred that are slightly larger.

Tess is the sister of the American space telescope Kepler, which was launched in 2009 and is now at the end of his life. The Kepler discovered thousands of planets, but most of them are very far away. Tess looks closer, in our 'backyard'. There are about 200,000 bright stars to be found there. Planets that revolve around them are then easier to study. And there is another difference: the Kepler zooms in on a small piece of the starry sky, Tess looks at an area that is about four hundred times as large.

Scientists have known for a long time only the planets in our solar system: Mercury, Venus, the Earth, Mars, Jupiter, Saturn, Uranus and Neptune. Until 2006, Pluto also applied as a planet. In the early 90s it turned out that the sun was not the only star that had planets around it, and the last few years it's going very fast. Meanwhile, more than 3,700 so-called exoplanets have been confirmed. In addition, there are about 4500 candidates, or planets whose existence is not yet fully established. How many planets there are in the universe can not be determined: there are hundreds of billions of galaxies, each system has many billions of stars and possibly the vast majority of stars have one or more planets.