Home / World / 'Terrorists Zaventem would have preferred another target' 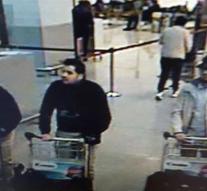 brussels - The terrorists who carried out the attack at Brussels Zaventem Airport on March 22, 2016, would regret the scene of their crime. They would rather be somewhere else to carry out their terrorist acts. It reports the French news agency AFP, following discussions with sources.

Belgium was not the first choice of the terrorists. On a laptop a message was found in which they apologize for the fact that they could not commit new attack in France.

The terror group would be 'in particular have coined by Americans', and possibly also against Jews, says an anonymous source told AFP. The researcher bases his claims on images from surveillance cameras in the departure hall of the airport. The video shows that one of the suicide bombers are 'urgently seems to go to two Orthodox Jews' in traditional costume.

Another source within the US government confirms the relatively precise target selection for Americans, Russians and Israelis, or passengers waiting for flights to these countries.

Ibrahim El Bakraoui and Najim Laachraoui let explode bombs last year in the departure hall of the airport. These 16 people were killed. The number doubled an hour later when another suicide bomber, Khalid El Bakraoui, brother of Ibrahim, blew himself up in Maelbeek Metro Station, near the European institutions. Among the 32 dead were at least 16 nationalities. There were about 400 wounded. Terrorist organization Islamic State (IS) attacks demanded on.