Home / World / Terrorists: We wanted to rob a bank 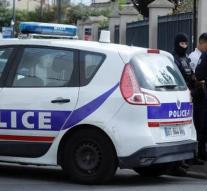 paris - The French authorities arrested three people after the discovery of explosives. The suspects claim that they were preparing a bank robbery but suspected of terrorist activities.

The police arrested the suspects after an invasion of an apartment in the Paris suburb of Villejuif had been found among the extremist popular explosive TATP. A plumber had tipped the authorities about suspicious conditions.

'People who are being researched spoke about blowing up a bank with TATP,' said Minister Gérard Collomb (Home Affairs) against radio channel Franceinfo. 'But the way we see it is that they are connected with terrorism. '

The authorities also found a second stock of suspects in the vicinity of Paris on Thursday. That happened when the police attacked a garage that was hired by one of three, said a source of justice.

TATP (acetone peroxide) is a very dangerous and relatively easy to produce explosive that has already been used in multiple attacks. In April, the French authorities encountered about three kilograms of dust at an invasion of a Marseille property.