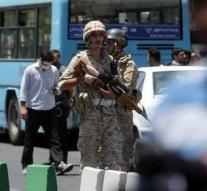 teheran - The terrorists who attacked the Parliament building and mausoleum of Ayyollah Khomeini in Tehran on Wednesday killed 13 people from Iran. That's what the deputy head of the National Security Council said in a television interview.

'About the identity of perpetrators, I can say that they came from certain parts of Iran, and that they had joined Islamic state,' said Reza Seifollha. In addition to the deaths, 43 were injured.