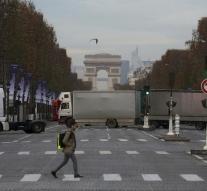 - Five terror suspects last weekend were arrested in France, had plans to commit on 1 December attacks in and around Paris. They include the headquarters of the French domestic intelligence in Levallois-Perret, the headquarters of the criminal investigation department, a courthouse and the Champs-Elysées on the eye, reported sources in the police in Paris and Disneyland in Marne-la-Vallée.

The targets and the planned date were investigated on the basis of information that was found on a smartphone. The five suspects were arrested Sunday in Strasbourg and Marseille.

Since its beginning in 2015 in attacks by Islamist extremists in France more than 230 people died. Most deaths, 130, were little more than a year ago when a series of coordinated attacks in a concert hall, cafes and bars in Paris and a football stadium on the city's outskirts.