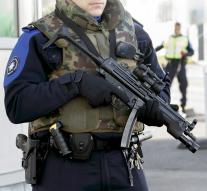 geneve - The police in Geneva have arrested two Syrian terror suspects. In the car of the duo found traces of explosives.

The police earlier in the day been beaten alarm because haunt possible four terror suspects in and around the city. They might have something to do with the bloody terrorist attacks last month in Paris.