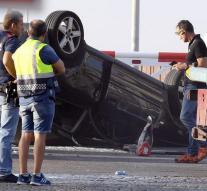 cambrils - The five members of the terrorist group that came to Cambrils were planning to put everyone in their way in the pedestrian zone.

It was not originally intended to drive people over with the Audi A3, the Spanish newspaper El Pais sets out based on sources around the police investigation. However, they were unable to implement their plan because they were faced with a police check.

According to the newspaper, eight members of the Ripoll terrorist cell are killed, four arrested and three are in flight. The arrested suspects must appear on Tuesday.

The terrorists from Cambrils had consciously chosen for the late time because they knew there were many tourists in the port, according to the investigation by the Catalan police.