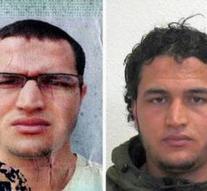 karlsruhe - The Tunisian terrorist Anis Amri, who prepared a massacre on December 19 with a stolen truck at the Christmas market in Berlin, acted alone. That Attorney General Peter Frank Wednesday after nearly four months of investigation published as fact. How the 'lone wolf' could escape the German capital, however, is still a mystery.

Three video cameras after the attack, which killed twelve people, recordings of the 24-year-old jihadist. The images can be seen Amri with a backpack. Moreover, it is that he has attracted from other footwear, which indicates that shortly after the act of violence was still here at home. How he then escaped attention in Berlin, is unclear.

The first victim was Amri was Polish driver whose truck he took. The slain man was found with a gunshot to the head. There are no traces of a struggle.

Until 21 December, Amri, who served in Germany from more than ten different names, again highlighted in a bus from Emmerich to Kleve. He had put in the new. In a shop in Kranenburg near the Dutch border, bought the assassin boxer shorts, socks, sweatpants and a scarf.

The North African Islamic extremist landed by Netherlands and France in Italy. He died from police bullets. Toxicological studies showed that in the days Amri no drugs before his death- had taken or psychedelics. Her analysis revealed that he regularly used cannabis in the past, in moderate quantities, and often in larger doses of cocaine.