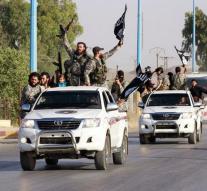 - American fighters of terrorism have the second car manufacturer in the world , Toyota, knocked on the fleet of Islamic State (IS) . The Americans are surprised at the huge numbers of Toyota pick-up trucks and SUVs where the jihadists it through Iraq , Syria and Libya ride .

The news channel ABC reported Wednesday that Toyota has indicated that it has no idea how IS coming to the cars and working with the investigation of an anti - terror unit of the US Department of Handel.De by jihadists with weapons equipped Toyota Hilux Pick- up and Toyota Land Cruisers drive back and forth in the propaganda films of Sunni extremists.

For a filmed IS parade in Raqqa (Syria) for example, was about two -thirds of such vehicles Toyota with black and white IS emblem on it.