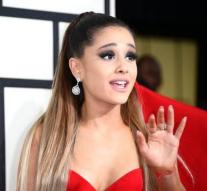 - In Costa Rica a 22-year-old man from Colombia was arrested. He would be threatened with a terrorist attack at Ariana Grande's concert in Costa Rica, reports the newspaper La Nación Costa Rica.

According to the police, the man expressed his threats on the website of the organizer of the concert. The texts were in Arabic. They appeared to be sent with a smartphone that the man had in his possession.

In May of this year, 22 people came to an attack shortly after the Ariana Grande concert in Manchester. The singer then interrupted her concert series and, along with other world stars, presented a bicycle show in Manchester for the victims.