Home / World / Terror suspect works in the port of Rotterdam 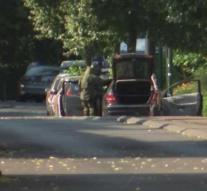 rotterdam - The man on his way to Paris to commit an attack works in the port of Rotterdam.

The 38-year-old Amir S. was arrested on Saturday with his wife in Belgium with a bombcase. The Iranian couple were on their way to Paris in their Mercedes to carry out an attack.

Het Nieuwsblad now writes that Amir, a naturalized Dutch citizen, lived in Wilrijk and worked in Rotterdam. His wife was in a store in Antwerp.

The couple now comes with the statement that the Iranian government threatened to kill their family if they did not commit the attack.

The target of the attack was a meeting of the Iranian opposition in Paris.

The two could be caught thanks to a tip that the security service received. There was a search in four places.

The Iranians had political asylum in Belgium. They had fled because they sympathized with the opposition group MEK where they now wanted to throw a bomb.

The event where the explosive had to go is visited by 25,000 people, including Rudolph Giuliani, former mayor of New York, Canadian Foreign Minister, John Baird

Amir and Nasimeh say they did not know they were carrying a bomb.

MEK has been a thorn in the face of the Tehran regime for years. At the beginning of this year, Iranian President Hassan Rohani called his French counterpart Emmanuel Macron when he would finally take action against that 'terrorist group that has turned Iran upside down for weeks with demonstrations from France.'

In Germany an Iranian diplomat was arrested who would have coordinated the action.