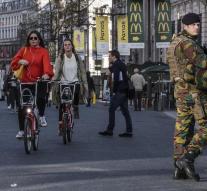 antwerp - The man who was arrested in Antwerp on Saturday afternoon for crossing the ax was on his way to a photo shoot. There was no terrorism, according to the Belgian Public Prosecutor.

The man was arrested by military and police. 'He appeared to have bought the ax just as a prostitute for a photo shoot as a tree shaker. He was on the way to the Action to buy even more items for the shoot, 'the authorities say.' There is therefore no element of radicalization or terrorist plans. '

After previous attacks in Brussels by terrorists, military and police are extra careful.