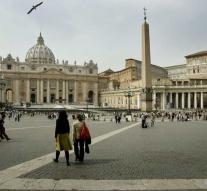 rome - The Italian authorities have arrested a Somali who had suggested to blow up churches. The man is suspected of having ties with the terrorist organization Islamic State, police say.

The police suspect that in the past the defendant was a fighter of IS. He arrived in Italy in 2016 and worked for a cleaning company in the city of Bari. The police had been keeping a close eye on the Somali for a month and listening to him.