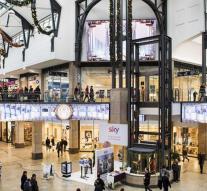 essen - Two brothers were arrested in Duisburg, because they were preparing a possible attack on a shopping mall in Oberhausen, is released. Police in the western German city of Essen Saturday made known that there is no indication that the brothers of 28 and 31 years old, both from Kosovo, indeed deployed terrorist activities and pose a real danger.

They were arrested Friday at the urging of a security. They were suspected of plotting an attack on one of the largest shopping centers in Germany, the Centro Oberhausen. There is despite thorough research found that the suspicion underpinning, but the police reacted with a view to the safety rather five times too many than one time too little, said a police spokesman.