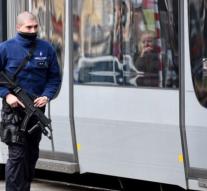 - A thoughtful man Thursday morning caused panic in a tram in Sint-Gilles. He threw a bag from the platform at a tram which passengers thought that an attack was committed.

'A suicide bomber! Flight! 'They yelled. Of an attack, however, did not exist. The man just wanted to prevent another passenger who had boarded the tram would forget the bag. It took ten minutes before tempers had calmed down and the tram traffic was resumed.