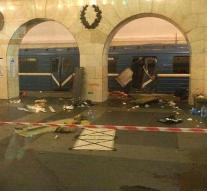 moscow - The Russian secret service FSB has cut off a terrorist cell that prepared for attacks in both Moscow and the north of the Caucasus. Four people have been arrested. When invaded in the state capital of Machatsjkala, a number of henchmen were arrested.

The National Security Committee said Sunday that the group held contacts with Islamic State. The FSB agents found three ready-to-use bombs and numerous weapons. The suspects should provide military and security forces, but also wanted to strike during public events.

Moscow says that this year, twenty terrorist cells have already rolled up and have detained or killed 120 suspected members. After the attack on the subway in St. Petersburg in April, police efforts were expanded greatly. Probably thousands of volunteers from Russia and the Central Asian republics have joined IS in recent years.