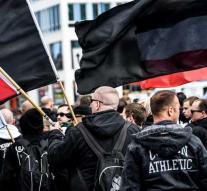 This is what the Süddeutsche Zeitung writes on Monday, relying on information from the investigating authorities. The seven arrested RC members prepared, among other things, violent attacks on journalists.

According to the Public Prosecutor's Office, the intention was 'to carry out armed attacks on foreigners and politically dissenters. 'In addition to politicians there were also representatives of the' social establishment ', including the media. The NSU killed eight people of Turkish origin, a Greek and a policeman in the period 2000-2007.

The Süddeutsche Zeitung reported that it was possible to tell from conversations that the extremists wanted to strike on October 3, the day of German unity. In the case of an invasion of their homes, however, only clubs were found, no firearms or explosives. A 30-year-old suspect belonged in the past to the wheel turners of the neo-Nazi club Sturm 34, which was banned in 2007.