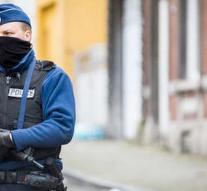 brussels - Two of the six people who were arrested Wednesday in the investigation into the machete attack in Charleroi where two policemen were wounded, suspected of being a terrorist assassination attempt. A judge has ordered the detention of Sabrina Z. (36) and Farid L. (37), the federal prosecutor announced Thursday.

Police searched eight homes Wednesday in the Charleroi region and thereby took stabbing weapons confiscated some of which resembled the cleaver used. A third suspect for the judgment is being extended by 24 hours. The other three were released after thorough interrogation.

The attacker, a 33-year-old Algerian who in stalking 'Allahu Akbar' called, was shot dead in front of the police station where he wounded the cops in their face on 6 August. What kind of relationship the suspects was not disclosed to him.