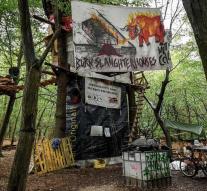 kerpen - The tension between law enforcement and environmental activists due to the planned harvesting of the 'brown coal forest' at Hambach (Germany) is running out. The police of North Rhine-Westphalia have designated the area in question Friday as 'dangerous place' where people can be arrested for control without any reason. Those who can not identify can be held for twelve hours.

Part of the Hambacher forest, between Kerkrade and Cologne, will be cut down for lignite mining. Environmentalists try to prevent or train this in various ways. A police spokeswoman stated that agreements were made in the forest about 'preparing and committing criminal offenses of considerable significance. 'In recent weeks, police officers have been fired with catapults, among other things.

The energy group RWE wants to start digging up trees in the autumn. The German Minister for the Environment Svenja Schulze wants postponement, but the liberal-Christian government of the federal state does not feel like it. RWE is fully entitled to mine the area and take it into production.