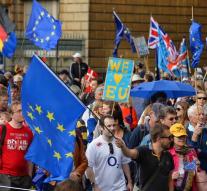 london - Tens of thousands of people went to London on Saturday for a demonstration against the intended UK withdrawal from the European Union. The pop march supported by pop musician and activist Bob Geldof led through the center of the metropolis to the parliament in Westminster.

The demonstration comes two days before a first vote in the House of Commons on a retirement law. The Conservative Government of Prime Minister Theresa May wants to include more than 12,000 European directives in its own British Code, based on that law. Opponents speak of an infringement of the separation of powers.

The position of the prime minister is shaky. She held early elections in June, but was weaker than she had expected. The divorce negotiations with the EU expired, which increases the uncertainty of the British population over the future outside the EU.