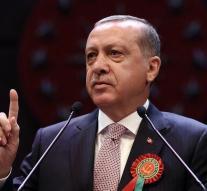 - Seven weeks after the coup attempt in Turkey Friday another 50,000 civil servants sacked under emergency rule by decree, partly because they would have supported a terrorist organization. More than 20,000 of them worked in education and nearly 8,000 in the police, reported the state news agency Anadolu. With all have now put a total of almost 130,000 civil servants on the side previously announced layoffs.

The Turkish Government proposes in America exiled cleric Fethullah Gulen responsible for the attempted coup of July 15th. Turkey considers the Gülen movement as a terrorist organization and the US has requested the extradition spiritual. Minister Recep Tayyip Erdogan and Gulen were political allies of each other until it came in 2013 to a break.

Erdogan announced on July 20 a state of emergency for three months. Since then he has ruled by decree.