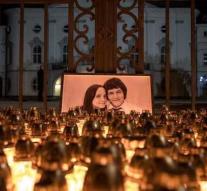 bratislava - Tens of thousands of Slovaks attended Friday evening meetings in memory of the murdered investigative journalist Jan Kuciak and his girlfriend. The government-critical newspaper 'Dennik N' estimated the turnout at 25,000 people in Bratislava alone.

Less massive wakes and quiet tours were in almost all other major cities. Before the Slovak embassy in Prague, hundreds of Czechs gathered to commemorate the dead-shot couple and light candles. Solidarity witnesses also existed in other countries.