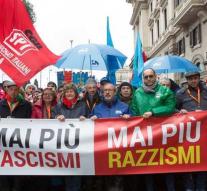 milan/rome - A week before the parliamentary elections in Italy, tens of thousands of people demonstrated on Saturday in different cities of the country. Significantly more people than expected took part in an anti-fascist demonstration in Rome despite the bad weather. The protest was peaceful, said a spokesperson for the police in the evening.

The organizers had expected 25,000 people. Premier Paolo Gentiloni and his predecessor Matteo Renzi were also present for a short time. According to the Ministry of the Interior, there were 119 smaller and larger demonstrations throughout the country on Saturday and 5,000 security forces were deployed.

In Milan, the leader of the right-wing populist Lega party, Matteo Salvini, filled the central cathedral square with its supporters. Protests against the extreme right-wing Casapound, which also held an event in the city, led to clashes between security forces and students, reported the Corriere della Sera. The Ministry of the Interior spoke of 'isolated and limited tensions. 'Also in Palermo, faced with an advance of the right-wing extreme Forza Nuova, clashes between right-wing and left-wing demonstrators were feared.

On 4 March, the Italians choose a new parliament. The last polls saw the center-right coalition of former Prime Minister Silvio Berlusconi and Salvinis' Lega lead by 36 percent. The strongest party is with about 28 percent the Five Star protest party. Behind this, the government party PD of Prime Minister Gentiloni comes with about 23 percent. The parties can conduct election campaigns until Friday.