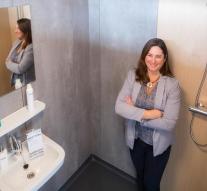 utrecht - From an old bathroom in eight hours to a new one. It sounds unreal, but Mitros has proven it can. In the future, thousands of tenants of the housing corporation can benefit from this innovative concept.

Dust, noise and for days to come do not shower: residents often look like a mountain against the renovation of the bathroom. 'We wondered if that could not be different,' says Angela Fischer, project manager at Mitros. 'Can a bathroom be renovated in eight hours?'

To answer that question, the Bathroom Challenge was organized: a search for a breakthrough in renovations to make it faster, better and cheaper. The two winning plans were performed in a vacant property of Mitros in Overvecht. The bathrooms of Coen Hagedoorn Onderhoud BV and Bathroom in one day, a collaboration of ERA Contour, Hemubo, Rutges Vernieuwt and Smits Vastgoedzorg, were admired yesterday.

In spite of that, Timo Stoopman from Badkamer is in his bathroom in one day. The modern bathroom looks like it has taken a lot of time, but it was done in eight o'clock. 'The biggest challenge was to design a design that we did not have to add, glue or kitten, because that should take a long time. If the challenge is eight o'clock, then the resident must be able to shower after eight o'clock. '

The design of Hagedoorn looks classic through the use of well-known materials such as white tiles and sanitary ware. Both designs consist of ready-to-use packages that can be customized in advance. In Bathroom in one day, the wall panels are clipped onto existing tiles and glued to Hagedoorn. Noisy noises such as tiling tiles are no longer necessary.

The next period will be the points on the I. 'It's fun that it takes eight hours, but it must also be really quality, long and well maintained,' says Fischer. 'We are going to test that now. '

The intention is that Mitros' residents in the future will assemble and order their dream bathroom via an online system. 'Then, as a tenant, you can plan your renovation whenever you want. You enter the keys in the morning and when you come home you have a new bathroom, 'says Fischer. 'If we are sure that these bathrooms are also in practice, we will expand this concept to properties throughout Utrecht and Nieuwegein. '