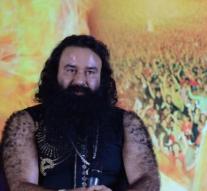 new delhi - An Indian court sentenced Guru Gurmeet Ram Rahim Singh to ten years in prison for rape. On Friday he was found guilty of the rape of two women in a case dating from 2002.

Fans of the self-proclaimed saint and leader of the spiritual organization Dera Sacha Sauda came to the north Indian city of Panchkula on Friday to attend the lawsuit. That led to violent protests, bringing about 38 people killed and over two hundred injured. The guru's movement counts a large number of fans in Punjab and Haryana.

In another case, the guru is still suspected of killing a journalist. He would also have forced hundreds of followers to castration.