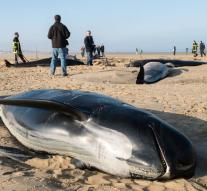 - Ten Monday whales are stranded on the beach of the northern French port of Calais. Seven of the group of pilot whales are deceased. The local fire department animal protectionists helped bring the surviving three back in the water, French media reported.

The black pilot whale is a large dolphin-like, which can be between three and nine meters long. They live in large groups, especially in the North Atlantic, and communicate with all kinds of sounds. They can be sixty years old.