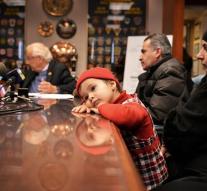 - The United States on Monday recorded the 10,000th refugee from Syria. This number was reached a month earlier than planned.

The inclusion of Syrian refugees has been a thorny issue in the American election campaign. Republican presidential candidate Donald Trump thinks that violent extremists the US trying to get by posing as a refugee. If he is elected president, Trump Gulf Arab states will put pressure to set up safe havens for Syrian refugees so that they do not have to be transferred to the US.