Home / World / Ten thousands of Rohingya on the run 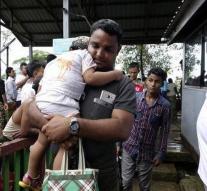 dhaka - Around 27,000 Rohingya fled from Myanmar last week to neighboring Bangladesh. Another 20,000 Rohingya are stranded in no-man's land between the two countries, allowing sources to know the United Nations.

Border guards of Bangladesh discovered the bodies of twenty Rohingya women and children on Thursday. They probably drowned when the boat with which they tried to flee to Bangladesh turned around.

The Rohingya, an ethnic Muslim group, tries to escape the worst violence in northwestern Myanmar in the last five years. According to a United Nations report, Myanmar security forces have been guilty of massacres and rapes against the Rohingya. In the predominantly Buddhist Myanmar, the Rohingya are considered illegal.